My favorite section of the NRA convention is always the collector section. Each year, there’s always something new to see. In Houston, I was really excited to see a major display from Dallas Arms Collectors themed around the Revolutionary War. When I realized that several items were traced back to specific patriots, I tried to do a good gun deed and track down a few descendants who appreciated learning their ancestor’s firearm still exists. I know I would love to find out that my ancestor’s gun is still in someone’s collection and preserved somewhere.

This year, on the way back from Atlanta, we stopped at King’s Mountain, where they also have a display of weapons and related items actually used by soldiers who participated in the battle. You know what I had to do, right?

When I go down to DC in June to visit DAR headquarters, I’ll be looking up the descendants of William Smith & Jacob Beeler who have joined DAR. For all I know, they already know about their ancestor’s gun and gear on display. But, on the chance that they don’t know…well that would be amazing to share with them. In the last news links post, I mentioned having fired an LARC M19-A BB-machine gun, linking to an article about it in Small Arms Review. My friend and sometimes co-blogger Jason still has the one I fired, and offered to take some video of it in action. It’s a lot of fun. If the anti-gun folks like calling semi-automatic rifles a bullet hose, this is about the closest you’ll come to one, except it shoots BBs. Watch it tear up this empty anti-freeze bottle:

Jason told me that the regulator on his air compressor struggled to feed the beast enough air, but there’s one good satisfying burst.

Behold the majesty of the DildAR:

I think the funny thing is, it looks like it shoots pretty flat.

Today’s good gun deed has me practically bouncing in anticipation for people to check their email inboxes and (hopefully) get back to me. When we returned from the NRA Annual Meeting, I went through the photos of the Revolutionary War display and looked up every name in the DAR patriot database.

I found one match between a gun that definitely belonged to an ancestor of two living members. With the help of another woman in my chapter, I actually tracked down the member names and their chapters – both in Illinois – and emailed the chapter leaders today with a high resolution photo of the rifle and powder horn.

I can’t even imagine how excited I would be if someone emailed me to let me know that a gun used by my Revolutionary War ancestors was still around and in great shape. In both cases, the man who owned and used the rifle was the 5th great grandfather of these women. Even the person in my chapter who just helped me find out who to contact is really excited about sort of “reuniting” this gun (at least in photo form) with his descendants.

This really makes me want to find other collections of Revolutionary War arms and see which ones can be tracked back to other people with proven descendants. It feels good to share this history that’s not only part of their family history, but is also key to American history. 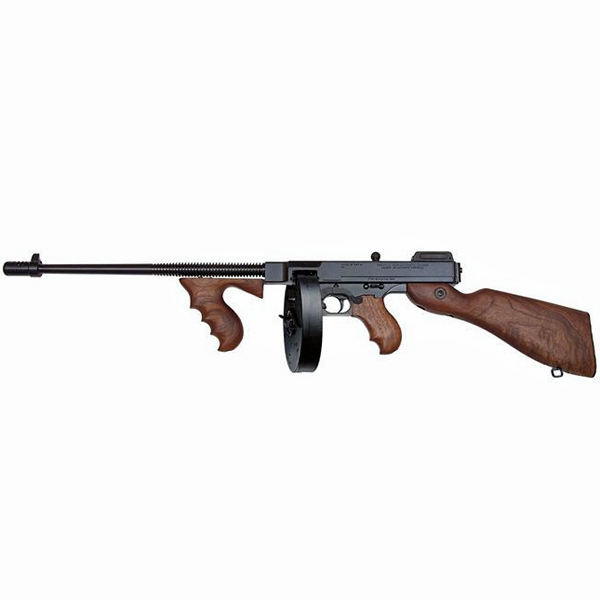 Contest participants were given a chance to buy one (or more) of 100 tickets in a drawing. The winners of each drawing from each batch of 100 were given their pick of 81 guns. In some cases for lower cost guns, they could pick two selections.

I spoke with another Foundation supporter who reported that before they stopped drawing, they had to pull off a Tommy gun because they ran out. I checked the model they had listed, and I believe it was this one.

Speaking of giving guns away, do we have any readers interested in a Colt LE6900? It’s a $899 gun that our Friends committee will be raffling off in a few short weeks for tickets that are only $20. It’s one of five guns we’ll be drawing for out of a maximum 300 tickets sold. That means if you liked the odds on our committee’s 1911 raffle last year, you should really like these odds.

I don’t spend much time on the show floor these days, but I was pleased to get to fondle an IMI Tavor for a bit. I’ve never been a big fan of bullpups, because I find the ergonomics on most of them border on sadistic. The Tavor was one of the best laid out bullpups I’ve handled. Let me compare it to another, somewhat new bullpup, like the Kel-Tec RFB, and to the AR-15 platform most of us are familiar with.

The Tavor’s magazine is released easily, and removed from the magazine well. It is simple to accomplish this with one hand without losing your sight picture. The RFB’s magazine rotates into place, somewhat similar to an FAL or AK. Except in the RFB, my shooting hand gets in the way of the magazine coming out. The Tavor is vastly better for magazine changes than the RFB. But the Tavor is not better than the AR-15. With an AR, I can drop an old magazine out with my shooting hand while my support hand has already fetched a fresh magazine. The Tavor requires the support hand to engage the magazine release and remove the old magazine.

The safety selector on all three is pretty ergonomically positioned, but there’s a great deal of difference in the bolt release. Both the RFB and Tavor put the bolt release toward the rear of the weapon, at the butt of the stuck. Both also feature ambidextrous bolt releases. But the Tavor’s bolt release in a lever located at the bottom of the stock, and only requires a quick slap to send the bolt forward. The RFB has small nubs on either side of the stock which requires a finer motor skill. I find the RFB’s bolt release is harder to actuate instinctively. The AR-15 bolt can be slapped home too, but the AR-15 lacks ambidexterity here.

Triggers on bullpups are generally awful, and a big reason I don’t like them. I don’t have great things to say about either the Tavor or RFB in that area. The AR-15 stock trigger beats both, and there are excellent custom trigger options on the AR platform. I’m also not to keen on systems that have limited options for open sights.

So I won’t be trading in my AR for a Tavor any time in the near future, but the Tavor is one of the only bullpups I’ve tried I would even think of buying.

NRA Blog features the story of a Connecticut couple who happen to share a love of shooting and support the NRA. For the husband’s 50th birthday celebration, the wife wanted to get him an AR-15-styled cake since she could not buy a real one from the stripped shelves of gun dealers.

Here’s the kicker, she actually had multiple bakeries refuse her business because they didn’t want to make “machine gun” cakes. That’s right, their hatred of firearms extends to cake that looks like a perfectly lawful and commonly owned firearm. However, a bakery named Jenny-Lu’s stepped in and made an absolutely amazing cake. Seriously, if I lived in Connecticut, I would gladly order a cake from this joint. They have also created fun hunting cakes before, too. And, oh dear Lord, the woman posts sinfully delicious photos of homemade Samoa-style cupcakes. Hey, all you gun companies up in Connecticut, order some kind of amazing gun cake for your employees – and get a side order of Samoa cupcakes. And then post pictures of people enjoying them. Because those look divine and the joy must be shared.

A new gun arrived this morning: Yes, it’s the Bug-A-Salt gun, loaded up and ready to go. Due to the lack of targets currently available, I am unable to offer a proper review at this time of its intended function, but I can offer first impressions. After experiencing the blast on my hand, and checking out the pattern on some aluminum foil, I feel it shoots with enough force to kill a fly. The real test will come when one gets into the house. The Bug-A-Salt feels like it’s pretty solidly built. It’s not at all flimsy, and the “magazine” or salt reservoir cap fits on tightly enough you won’t worry about it popping open and pouring salt everywhere.

Fit and finish leave a bit to be desired. The yellow part is painted, and somewhat unevenly, but it looks good enough, and if it gets the job done, that’s all that matters. The pop up sights are really only for fun, given you have both front and rear notches that don’t facilitate more than a crude aim, but given the pattern of the salt spread, and the distances it’s intended to be used at, I don’t think you really need sights. Trigger pull is heavy, and requires disengaging the safety first, which resets after every shot.

I will follow up later with function tests, on both flies and stinkbugs. Our office is infested with stinkbugs, so it may get quite a bit of testing there.

An interesting conversion just approved by the Israeli Police. Would require a tax stamp here, though.

This shotgun looks like a Turkish manufacturers’ answer to the Kel-Tec KSG. Like the KSG, it has a three-position selector to choose between the right magazine, left magazine, but a big and nifty difference, I think, is the fact that the middle position on the UTS-15 causes the firearm to alternate between tubes, whereas in the KSG it blocks both magazine tubes. As Hickok45 shows, it makes it easy to alternate between different loads. I’ve heard of reliability problems with the KSG as well, which makes me wonder how the UTS-15 compares in that department.