One day of our trip involved arguing with the Oklahoma State Department of Health for access to family death certificates and a much more exciting stop at the Oklahoma Historical Society’s Research Center. Looking for obituaries seems a little morbid, but it’s actually kind of fun to read the old newspapers while you’re searching.

This is one headline from the 18 Jan 1912 edition of The Leedey Times of Dewey County, Oklahoma that you’d never see today. Before anyone jumps on the editor for using shotgun and rifle like they are the exact same thing, I suspect that was more for the visual space in the headline. I think rifle would have been too short and left too much whitespace. I find it hard to believe that a newspaper editor in rural Dewey County wouldn’t know the difference.

I really liked the week in Oklahoma, but I do have to say, not as much singing as I expected.

How many states can say their official state song was written by Rodgers and Hammerstein? Sadly, I hear Mr. Chips has been waiting by the swinging chair for me to return: The barn cats all seemed to take a liking to me, especially Mr. Chips.

Sorry for the lack of posting, but we had to take a trip to Bitter’s home town, a place where the corn grows as high as an elephant’s eye (actually, down there it’s more like the cactus rather than corn). Bitter’s grandfather, who she has not seen in 11 years, called on her. I’ve now met three of Bitter’s grandparents, all of whom are still alive, but obviously her grandfather is struggling at nearly 90. All my grandparents were gone by the time I was 30.

In that one picture, that’s probably about as close as I’ve been to horses in my life. We stayed at her Uncle and Cousin’s. Her cousin owns a horse ranch and riding school.

This is a bit off topic, but news is slow on the gun front today. I ran out of energy for arguing over what libertarianism is and isn’t in my late 30s, but for the sake of a conversation starter, I thought I ask the question of whether a mandatory quarantine is compatible with libertarian principles, however you want to define them.

I suppose some would argue that a quarantine violates the non-aggression principle. Others would probably argue that spreading a disease to someone is initiation of force, and so the state is justified in preventing it. But really, there’s only a risk if you go out in public that you’ll spread a disease. What level of risk constitutes aggression?

These days I’ve learned to like Prof. Randy Barnett’s argument that having a theory of the state police power is important. Under that idea, quarantine would typically fall under a traditional police power the states have held. However, since the federal government lacks a police power, it’s only quarantine powers would be related to international travel, and interstate movements. Some would argue, I believe convincingly, that if you’re a dedicated originalist, the federal government probably has no quarantine power at all, since the Constitution only gives Congress the power to control naturalization of persons, and not their movement.

I keep saying I want to wrap up with this current client, but things keep coming up. So I’ve been in “I think I can wrap this whole thing up in the next few weeks” mode for the past two months. So I dare not say things should be returning to normal in a few weeks, but maybe! At some point, the project will end and I’ll be on to other things. Anyway, here’s some news links. Not too many this time, because to be honest, I haven’t even had time to gather links:

Don’t bring a knife to a gun fight.

What’s wrong with Oregon Republicans?Â Oregon is dominated by the Portland Metro area, so there’s not much hope for the GOP there. The GOP’s weakness in Pennsylvania, however, is almost entirely the fault of the GOP. The party in this state is sclerotic.

Holder: gun control among biggest failures. Happy to disappoint ya there Eric. I would imagine it was a tough thing to weigh his greatest failure.

John Richardson points out some other players in the I-594 initiative in Washington State.

The Supreme Court has agreed to hear a gun forfeiture case.

Glad to see Clayton Cramer has been doing better, but he’s still having some ups and downs. Hitting the tip jar would probably help. Money may not buy happiness, but the lack of it can certainly bring on a lot of misery.

Just another Everytown grassroots spokesperson who happens to work pretty high up for the Mayor’s office in New York City. It’s astroturf as far as the eye can see!

DC gets smacked down by the judge who ruled their carry ban was unconstitutional, but their new ordinance still has to have a hearing. Let’s hope the judge has read this.

A civil rights victory in Idaho! Ban on carrying guns on Army Corps of Engineers land is struck down. Right now this only affects the District of Idaho.

This comes by way of Legal Insurrection:

Confront them everywhere they appear. Never let them own the field.

Ace has a pretty decent write-up on the controversy on the Pennsylvania Supreme Court surrounding Justice Seamus McCaffery, who got in trouble for sending around raunchy e-mails on state computers. Apparently Justice McCaffery and the Chief Justice Castille don’t get along too well with each other. At the end, Ace notes:

Philadelphia Magazine says the war is partly about the power to supervise all of Pennsylvania’s state courts — power Castille doesn’t trust McCaffery with.

I actually found this article to be a very interesting read on the problems of media today. While some in media just want to pretend that it’s the financial challenges that keep things tough in journalism, Kristi Culpepper notes some other deep flaws in the profession:

There is less concern among the media for developing actual expertise in the fields they write about, capturing events accurately, or providing thoughtful analysis. Some journalists I have interacted with even take pride in their lack of seriousness, which is unfathomable to me. Reporting is less about honesty and more about ubiquity now.

Contrary to how it seems sometimes, we’re not actually completely anti-media in our household. If there’s someone out there who does reporting/writing right, we do pay for it. We have a few digital subscriptions, and we’ve even participated in a PBS fundraiser once because that particular station happens to produce and play (non-news) content we enjoy. But the problem is that many news organizations no longer value the reporting and writing done right. I’m not sure how to solve that problem when, as argued above, there are people in the industry who take pride in the fact that they are incapable of covering an issue with any sort of seriousness. 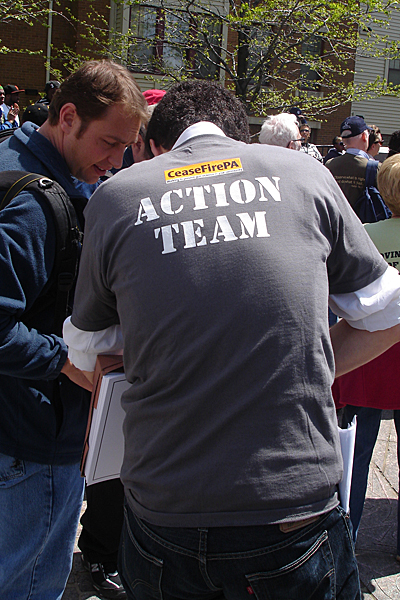 It would appear that Pennsylvania gun owners may need to work a little harder to educate our opponents.

I don’t mean that we need to educate them on how firearms actually work or on the historical lessons of the Second Amendment – they’ll never listen to those messages.

What our opponents need is a return to elementary school spelling classes, perhaps with a mix of middle school civics to supplement their lessons.

This tweet, with the creative spelling of amendment, went out to at least 26 Senators. I get that typos happen (don’t even get me started on how many people I see who add an extra ‘m’ to the word), but in a call to action tweet sent from a professionally staffed organization to over one half of the members of a legislative body, that’s a pretty sad mistake.

I hope that people on our side of the issue will remember to double check your tweets and messages before you start writing to lawmakers.

The Brady Campaign has started a system of organizing phone banks from across the country to get people out to vote in the Washington ballot initiative fight. This is the kind of election work that so very few of our people are willing to do. It is unfortunate because, as annoying as those phone calls can be, the personal calls are among the best way to encourage someone to get out to vote and to find out if someone already has voted or plans to vote.*

This is the period before an election where the grassroots becomes vital. If you’re a Washington gun owner and you want to stand any chance of beating the cash Bloomberg, Gates, and Ballmer are throwing obscene amounts of money at this gun control initiative, you have to be working hard to inspire other gun owners to show up and vote your way.

In 1976, Massachusetts gun owners defeated a ballot initiative through tough grassroots work. Gun owners bothered to show up (about 18,000 of them) to county-wide meetings. Of those, about 2,000 became active volunteers. They spent Election Day standing outside of polls with literature and signs. They spoke out in their communities. These last few days are the days to pull votes away with a campaign to inform the people who only pay attention to the ballot in the last couple of weeks.

I know when I posted about this type of grassroots work before, people complained that they weren’t involved because they didn’t see anything personally. Well, go look for it. NRA’s involvement (and I know there’s more on the ground, too) has been highlighted on a Facebook page with local events and they put 2 full-time staffers on the ground who have been listed on their elections-related page for months. This is on top of the volunteer network that has already been in place there. The resources are there, now it’s time for local gun owners to use them if they want to stand any chance at all.

*Here’s a tip: Let a live caller know that you’ve a) already made up your mind for issues or a candidate, or b) already voted (if early voting is allowed), and you’ll end up dropped from most future call lists for that election. Phone calls are pretty much only get out the vote or know who plans to get out and vote activities. Letting either candidate know you’ve made up your mind or already cast a ballot means they don’t want to waste time on you anymore.