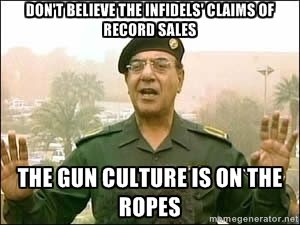 This is real Baghdad Bob shit right here. Basically, to sum up, the NRA is increasingly dependent on the firearms industry for money, because $14 million has been donated by gun makers over the years. The author even mentions NRA’s revenue is $310 million from membership dues. Do you even math!?!?

But even with that, white men are headed to political extinction, gun ownership is in decline, especially among women, because the General Social Survey says so. NRA is facing stiff competition from Larry Pratt and Dudley Brown, most of its members secretly hate the NRA and disagree with it. Members will probably revolt just like Republicans did against the establishment because they secretly support gun control. Â 3D printing will be the end of the NRA because it will dry up that 14 million a year because it will put all the manufacturers out of business.

Seriously, Sarah Ellison ought to stick to writing about topics she knows about, and should also stay away from math. Last I checked $14 million dollars was 4.5% of NRA’s revenue from individual members. We call that “not really a lot.” Ms. Ellison could also use a lesson in discerning propaganda from gun control groups from actual research.

21 thoughts on “Journalists Who Can’t Do Math”