This is going viral in the gun-o-sphere: 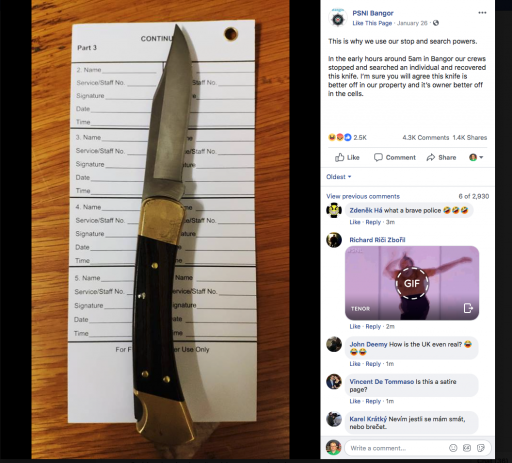 I know, I know, UK cops saving the world one Buck 110 at a time. I think my father might have had one of those.

But just some historical notes for the curious: the PSNI are the Police Service of Northern Ireland. They are the successor organization to the Royal Ulster Constabulary, who were regarded, and not without justification, as thugs with badges by the catholic population of Ulster. PSNI are the kinder, gentler RUC that were created under the Good Friday Agreement, which governs Northern Ireland’s relationship with the British mainland.

Northern Ireland is part of the United Kingdom, but it is not part of Great Britain. The Northern Irish are Irish, not British. Though many are Scots by descent. Great Britain is Scotland, England and Wales.

Because of the Good Friday Agreement, Northern Ireland are not subject to the same gun laws found in Great Britain. You can still legally own a handgun in Northern Ireland. It is the only part of the United Kingdom where self-defense is an acceptable and valid reason to own a firearm. However, they are still governed by the ridiculous UK knife laws, which is seems to Police Service of Northern Ireland are enforcing. Locking knives are strictly forbidden under the Knife laws, as are knives with blades longer than three inches. The Buck 110 both locks and has a blade that’s 3.75 inches long.

13 thoughts on “Where Great Britain Never Was”