“We are in the middle of a grand political realignment, and the S.S. Second Amendment is going to get tossed around by the storm along with everything else. When we find a new political equilibrium, I don’t know where the Second Amendment and a host of other cultural issues will be, and neither does anyone else.”

From “St. Louis”: “The making of NRA’s Dana Loesch” I would encourage everyone to read it, and maybe read it again. NRA should be very concerned about polling numbers. While I believe there’s an argument to be made that polling increasingly doesn’t work, that’s another post. It concerns me that you can trace movement in public opinion back to the point where Bloomberg really got his act together and started dumping serious money into gun control. 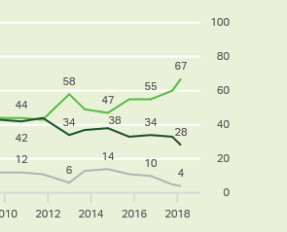 You can see the expected spike post-Sandy Hook, but then around 2015 it really starts headed in a direction we don’t want. That also happens to coincide with NRA adopting what I’ve called the Angry Dana Strategy. Anger is only going to get you so far. People eventually tire of anger. I know I’m tired of seeing shit like this.

Look, I get it was a joke that was taken out of context.Â ButÂ what the fuck does diversity or the lack thereof on Tommy the Tank have to do with the Second Amendment, shooting, or gun rights? I’m finding I’m having to ask this question way too often these days. Who thought it was a good idea to do this? What are you smoking? This isn’t just poor judgement on Dana Loesch’s part, it took a team effort to fail this hard.Â Mockery is a lot more powerful than anger, and I’d cheer NRA shifting away from anger to mockery, but it has to work. You need people who can pull it off. It’s hard to do well. It takes sharp writers and a host that can deliver it.

Unfortunately, I don’t believe any of this is going to change as long as membership holds stable or goes up. Eventually the Angry Dana Strategy won’t hold back the tide of public opinion if Bloomberg can keep it going in his direction, and we’re all going to pay the price for that when the dam eventually breaks. NRA needs to get back to basics and start making grassroots organizing the heart of its strategy. The tools to accomplish that are a lot more powerful today than they were in the 1980s.

We are in the middle of a grand political realignment, and the S.S. Second Amendment is going to get tossed around by the storm along with everything else. When we find a new political equilibrium, I don’t know where the Second Amendment and a host of other cultural issues will be, and neither does anyone else. If Ack-Mac thinks they know, they are kidding themselves. Is NRA being lashed together with sinking ships? I don’t know.

Ack-Mac won’t get NRA through this. What can get them through it is their core membership, sometimes members, and aspirant members. But you have to do something with them. Feeding them a firehose of media isn’t organizing them.