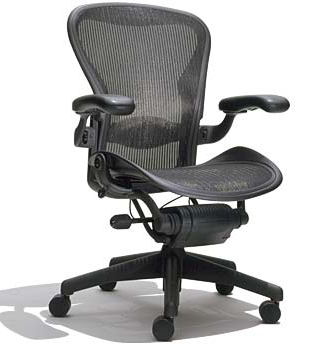 I’ve been planting my rear in a Herman Miller Aeron Chair for the better part of a decade. Back around 2003 the previous company I worked for acquired another company out in San Diego that was about to go tits up. We mainly wanted their technology and a few key employees who understood it, but it also came with a heaping shipment of Aeron chairs. I snatched one up immediately, figuring it was better to ask for forgiveness than permission. It’s hands down the best chair I’ve ever owned. When our company finally went tits up in 2011, I was the last employee out of the building, and since the wind-down team had to hold on to our chairsÂ through the asset auction, I took two Aeron chairs home.

Everything was fineÂ until just before we were ready to head to Annual Meeting, and I stood up from my chair and the right arm broke clean off; the bolt head having separated completely from the shaft. Given the chair is about 14 years old at this point, that’s not a bad run. But I’m loathe to spend money on a new one. The trouble with fixing it is that Herman Miller pretty heavily controls its parts distribution, and there are only certain approved parts that can be sold, like lumbar pads and arm rest pads. There isn’t a arm rest bolt to be found on all the Internets that doesn’t look like a cheap non-hardned knockoff.

Herman Miller demandsÂ you to take the chair to an authorized service center to be repaired. I have a real problem with forcing customers to screw themselves out of hard-earned cash. It’s a chair, not a Saturn V rocket engine. I can fix it myself given the proper part. My guess is Herman Miller knows the .com crash flooded the secondary market with their chairs, and they know they are very well built and last forever. So they have to manufacture ways to extract money from the used market, and probably hope you’ll just buy a new one. Except that one with all the bells and whistles, a new Aeron pushes close to 9 or 10 bills.

So I’m kind of pissed off at this whole thing. I’m wondering if anyone out there knows of either a good Aeron knockoff that’s well built and comfortable, or knows a good source for Aeron parts outside of official Herman Miller channels. I’d also be open to getting a broken one to use for parts if it’s cheap enough too.

UPDATE: I found a solution! The chair lives!