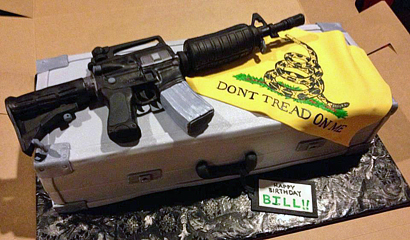 Sure, we highlight the legal and political debates on guns, but we all know the internet was created by Al Gore so that we could debate such topics as 9mm vs. .45.

NRA is hosting a somewhat similar debate on fan favorite long guns over the next two weeks. Today’s face-off is the Springfield M1A SOCOM II vs. the Kimber 8400 Patrol. With 2.5 million fans, this could be like an internet gun debate on steroids. I bet the staff there are sitting back with the popcorn to see how this topic drives discussion in comments.

My vote is for the image on this post – cake gun.

Then ExUrban Kevin decided he wants to open discussion on what kind of gun should James Bond really be carrying. From one of the points made in the post, I had no idea that Princess Anne was nearly kidnapped once.

7 thoughts on “The Other Gun Debates…”