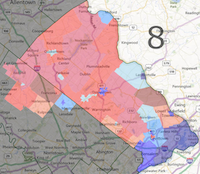 I was quite pleased to come across two quality election analyses of two Pennsylvania congressional district and their traditional counties of representation. They happen to include both my current county (Bucks), and also the county I grew up in (Delaware). Having read them both, they are quite thorough and good, and done by people who seem to have a grasp for the political situation we’ve been facing here in the Philadelphia suburbs. If you’re interested in the suburban Philadelphia political dynamic, or in Pennsylvania politics in general, I highly recommend following the links. I think it’s very important for all Pennsylvanians to understand the dynamics here, because with the western part of the state rapidly depopulating, politics in this state, including gun politics, is going to increasingly be decided in the Philadelphia suburbs.Â First, here is an excerpt from the Bucks County analysis:

Bucks, along with the other three suburban counties on the Pennsylvania side of the Delaware Valley, was traditionally a Republican stronghold. While Lower Bucks, dominated by union influence, has traditionally been Democratic, Republicans have always dominated county politics on a local and statewide level. Bucks County voted about four points to the right of the nation in the 1980 and 1984 Presidential elections and about seven points to the right of the nation in the 1988 Presidential election. The right Republicans, ones who could connect with Lower Bucks’ working class, heavily Irish Catholic population, could even squeeze out votes from Lower Bucks. Even if a Republican wasn’t a great fit for Lower Bucks, middle and upper Bucks provided more than enough votes to give Republicans a strong victory countywide. Middle and Upper Bucks have traditionally had a very Christian population but one with a pacifist streak.

However, Demographic changes that have magnified since the early 1990s have stripped Bucks of its historical position as a Republican stronghold. With minority growth in the borough of Bristol, Bristol Township, and Bensalem Township, Morrisville, and Falls Township, Lower Bucks has become harder for Republicans to win crossover votes in the lower third of the county. Additionally, middle aged Jews who had the money to leave Northeast Philadelphia, or their wealthy college graduate children, largely settled in middle Bucks around the Newtown or Doylestown areas …

For years, Delaware County, Pennsylvania had an almighty, well organized Republican machine that controlled the local government and its politics. Party bosses and the “War Board,” the county Republican Party’s executive committee, ranÂ everythingÂ in Delaware County. Even in the county’s historically black areas, like Chester, Republicans controlled many local offices. Current Pennsylvania Senate Majority Leader Dominic Pileggi (R-Chester) served as Chester’s mayor between 1999 and 2002 and Chester even had a Republican mayor until 2012.Â …

The author then goes on to document how Delco has swung hard in the other direction, mostly due to demographic changes. The overall picture in both counties, at least how I read the maps, isn’t so much that the GOP has lost adherents, though the strong social conservatism and bungled war efforts during the Bush years certainly have contributed to that, but that the traditional GOP voters are moving farther out, with urban, largely Democratic voters from Philadelphia moving into the near suburbs. That’s making it more difficult to draw safe GOP districts.

The good news is the cohort of voters which have formed the traditional GOP base swung back in the 2010 and 2012 elections. If you think the Obama effect is temporary, that’s a good thing. There might be a basis to get a lot of suburban voters back into the fold, if the GOP is smart. The sad part is, the GOP is quite often far from smart. The “culture wars” have not helped the GOP in this area. In terms of gun politics, there is still a rather healthy gun culture in Chester and Bucks counties, to a lesser extent Montgomery county, and to a considerably lesser extent in Delaware County, especially the eastern parts. There is a basis through which we can form a movement. Creating a pro-gun movement for Pennsylvania’s future is going to depend greatly on mobilizing activists in this part of the state. In my experience, it is hard, but Obama is currently providing us a base from which to do it.

7 thoughts on “Great Analysis of the Philly Burb Political Dynamics”