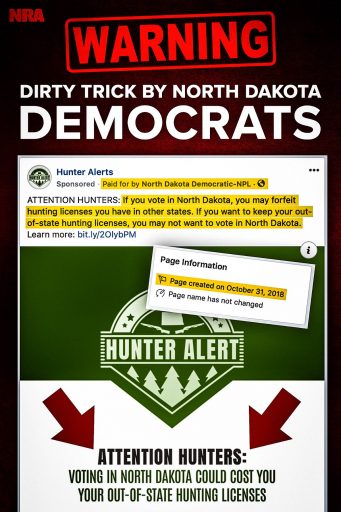 The North Dakota Democratic-NPL Party created a Facebook page on Halloween to stir up some election tricks.

They created a “Hunter Alerts” page to use as a platform for buying Facebook ads to target at hunters and gun owners. As you can see in this image from NRA created from screenshots of the page details and ads they are running, they are trying to convince any hunter who might hunt out-of-state that they will lose those licenses if they show up to vote.

If these tactics show any sign of working at all – if there is any drop in gun owner participation in the North Dakota election whatsoever – this will be copied around the country to try and keep gun owners from turning out to vote. They know that we turn out in very high numbers to protect our rights, so now they are trying to use our rights and lawful activities against our voters to convince them not to vote.

Also, if you see any paid ads like this at all in your social media feeds, make sure to get screenshots and drop a message to the NRA page. They can take a look to investigate further. Getting the word out to the voters they are lying to can hopefully give NRA & local gun rights leaders the chance to respond so that the goal of keeping these voters home doesn’t work.

13 thoughts on “Attempts at Gun Voter Suppression in North Dakota”