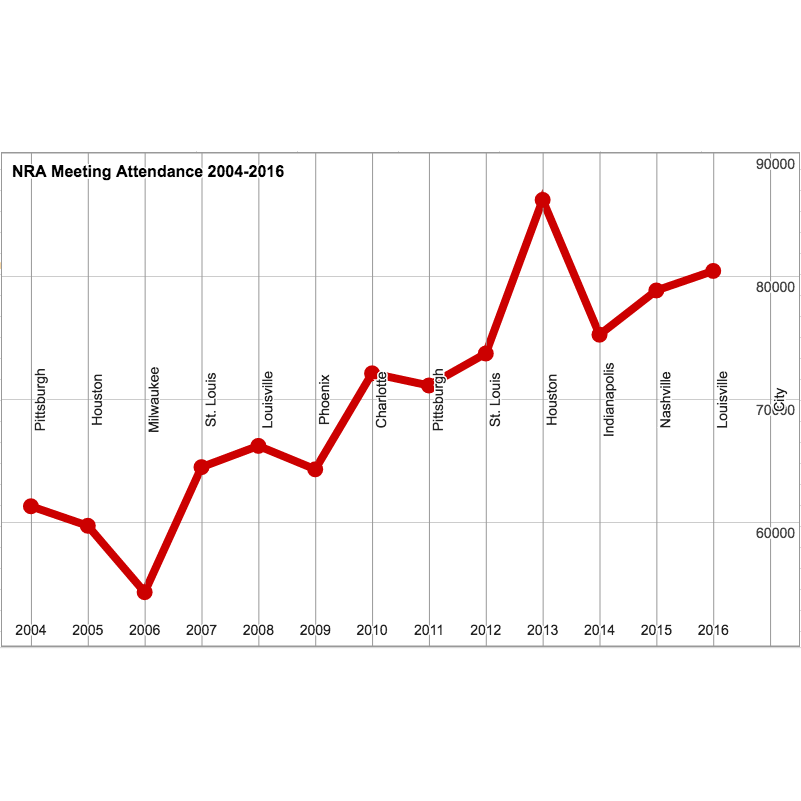 While I was driving all the way from Louisville to Philadelphia-area yesterday, Sebastian handled the reporting of what so many always want to know – how many freedom lovers came out to hang out with fellow NRA members.

Beyond the fact that it’s the 2nd largest convention, how does it really compare? Fortunately for you all, I like data that no one else seems to keep.

I’ve been keeping track of the attendance ever since my first meeting in 2004, or as I call it, Pittsburgh #1. Since that first meeting I attended out of college, this year’s meeting was about 1/3 bigger (31.2%). Over last year, the growth was nearly 2,000 people, but only about 2%. In that time, we’ve had 4 repeat cities – Louisville, Houston, St. Louis, and Pittsburgh. Aside from Houston which is kind of an anomaly, Louisville actually saw the greatest same city increase in attendance (21.5% compared to Pittsburgh at 16% and St. Louis at 14.3%).

Most of the dips you see in the early columns are simply location issues. That has become less of an issue since I started attending, as more people are willing to make this an annual or nearly annual tradition regardless of how far it is. In this article on Indianapolis securing two more years, they note that Houston’s last convention saw 43% of attendees coming from 200 miles away or more. You can see this reflected around the floor and in the member meeting where this year’s family of the youngest life member was from Chicago and the oldest life member traveled from Ft. Smith, Arkansas.

And while I don’t have firm numbers since the other side is against such measures, I can tell you that you can largely flip this chart around and chop off many zeros on the numbers to represent the anti-gun side presence at each event. There were actually a good number of protesters at Pittsburgh #1. They were pretty good spirited folks, too. There was a chanting contest and someone who shipped a Million Moms banner up from their Atlanta chapter. The biggest downers at the event were the ACLU volunteers who were trying to convince NRA members that they had no right to photograph protestors on the street, presumably in an effort to keep us from highlighting how few there were compared to the 61,319 NRA members. There was an uptick for Pittsburgh again in 2011, but otherwise, the protests just keep getting smaller.

It will be interesting to see the future. The event is getting large enough now that many cities simply cannot handle it. Even though Louisville has some of the largest event space in the country, the logistics just don’t work well. The Expo Center didn’t open enough gates for getting people into the parking lot, and there parking attendants weren’t on top of making sure spaces were filled in an orderly manner on their busiest days. They also apparently did nothing to try and direct traffic on the main roads to under-utilized gates. The gate we used (6) had very little wait on Friday based on the Google traffic report and very little on Saturday, too. That’s on the city hosts, and not on NRA. However, since NRA has to look at the bottom line of member experience, Louisville could lose future business by their unwillingness to manage traffic in a reasonable manner for an event they knew to be huge. Interestingly, it looks like Louisville is losing other conventions of similar sizes like the FFA which is close to 60,000 people. That article actually notes that new hotel space is only going up downtown, away from the Expo Center. That only compounds the traffic concerns.

As for the immediate future, the dates and locations are: