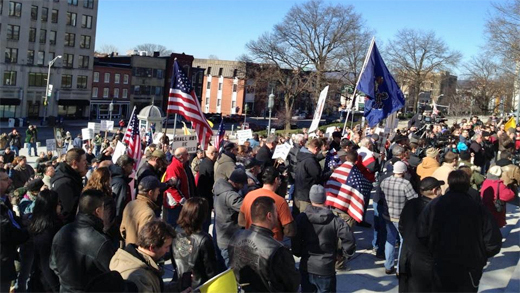 In light of yesterday’s post from Sebastian about concerns over messaging from NRA, and combined with the effort I’ve noted from Mother Jones to try and divide and conquer, the left-wing magazine is now trying to promote the notion that NRA doesn’t really have much in the way of grassroots and that everyone is just a paid shill of the evil gun lobby.

Their argument is that the NRA News commentators are paid, so therefore they aren’t really the grassroots of the gun culture. There’s just one big glaring problem with their story: the evidence doesn’t support it. Sure, the NRA News team and the commentators themselves have confirmed they are paid now, but Mother Jones ignores the fact that these people only got picked up because they were already actively part of the grassroots gun culture.

For example, they say this about Colion Noir:

Team member Noir recently confirmed in the Los Angeles Times that he was approached by the NRA and agreed to a deal, but also declined to discuss his compensation.

It makes it sound like NRA went out and to just find a black guy and offer him money to spit out pro-gun talking points. What Mother Jones leaves out is that Noir was brought on as staff in March 2013, but he already built a successful Twitter/Facebook/YouTube/Instagram following long before that in 2011 (or 2012, in the case of Instagram). He was approached to come on as staff because he was particularly successful as part of the grassroots gun culture.

For another commentator, Billy Johnson, he came onto NRA’s radar because he decided to make a video about real gun violence statistics at the end of 2012. That single video has more than 1.2 million views. Think about that. A video about statistics posted during the holidays has pulled in more than 1.2 million views. Billy Johnson told followers that NRA News didn’t contact him until the summer of that year. In other words, they found him only because he was already successful as a grassroots commentator speaking to Second Amendment issues.

The other commentators have similar stories, but slightly different backgrounds in the grassroots gun culture. None of those pesky little facts about the history of involvement that each of these men and women had in the grassroots gun culture is ever mentioned, and I suspect that is on purpose. It wouldn’t help their cause to remind politicians that while these people are currently paid staff of NRA News, their backgrounds in the issue before they were paid represent hundreds of thousands of people all involved in promoting the Second Amendment and the shooting sports.

Of course, I would also say that NRA needs to remember this lesson as well. Sure, Ackerman McQueen may have put some of the better grassroots spokesmen on the payroll to roll out a few decent videos, but those spokesmen aren’t NRA’s power. NRA’s power lies in the millions who vote their gun rights, organize their shooting leagues, and bring the message of the Second Amendment to their family and friends. One reason I’m concerned that some in Fairfax may be forgetting this is because I only heard one speech that actually acknowledged this real power of our movement.

Even the Grassroots Seminar this year wasn’t promoted very much. It was left out of the event app, is nearly impossible to find on the Annual Meeting website and schedule, and was smaller as a result of the missed opportunities for promotion. An annual election volunteer coordinator event was cut this year, though Sebastian & I still reached out to Grassroots staff to have a chat on strategies and organizing in the movement. Granted, one factor in participation is likely a feeling of a little burnout because the movement has had to be “on” constantly for at least two years now, but NRA just needs to remember that a snazzy video channel and fancy posters don’t replace the rest of the field of grassroots activists.

2 thoughts on “The Real Grassroots of Gun Culture”