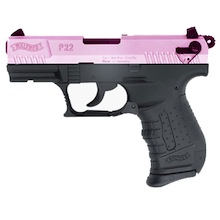 I’m going to joinÂ Weer’d and ThirdpowerÂ in calling out the anti-gun folks for denouncing more money for breast cancer research because a dealer is agreed to donate a portion of his sales to the Komen Foundation. It’s hard for me to imagine any product I’m so disgusted by, that I’d lambast a disease research and awareness foundation for using it to raise money. If it’s a product people want, it’s legal, and they can use that to raise funds, I don’t think most ordinary people would complain.

I’m literally aghast by how awful the leaders of the gun control movement really are, to the point I don’t really understand how they can look in the mirror each morning. They’ve become so blinded by rage against guns and gun owners, they’re completely detached from the reality that most normal people understand.

There’s nothing unusual or out of the ordinary about the firearm that is being sold to raise funds for the Komen Foundation. It is an ordinary .22 caliber target pistol. It takes a ten round magazine. It is a gun that is legal in all 50 states. It meant for sport, something the gun control movement claims to be fine with. So what’s the beef here? I think I’m pretty sure I know who the extremists are here, and it’s not Second Amendment advocates.