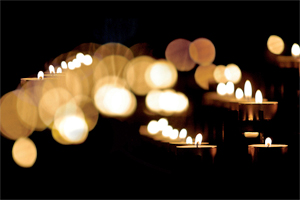 Besides candles, what’s missing from their “big” announcement of a candle-lighting ceremony? Joe Huffman caught it.

They list a number of locations where you can join in a â€œNational Candlelight Vigilâ€. The interesting thing is they only list 28 locations in 15 states. There are no events in many of the cities and states where they claim to have chapters. This includes the supposed chapter in Arizona! This state in particular is significant because the event date, January 8th, was chosen as the anniversary of the Tucson, Arizona shooting in which Congresswoman Gabrielle Giffords (D-AZ) was severely wounded and six people were killed.

He includes the full list of Brady “chapters” who are not participating in their event, and you might be surprised at those who are sitting out. Delaware, the home “chapter” of Sarah Brady, is sitting this one out. Three-quarters of their chapters in New Jersey are planning on skipping this event. In the area surrounding their headquarters, the Maryland chapter and three of the four Virginia chapters are passing on the big day. Their chapter in Wisconsin must be demoralized after losing on concealed carry since they are also shying away from the event. There are more, those are just the highlights.

6 thoughts on “What’s Missing from the Brady Candle Lighting Ceremony?”