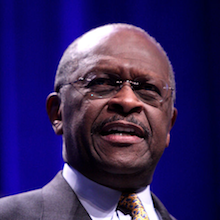 A lot of people seem to like Herman Cain. Given that the GOP field is a choice between Romney, who’s bonafidesÂ on the Second Amendment and health care are not to be trusted, and Rick Perry, who is increasingly looking like a candidate who doesn’t have the chops to operate on the national level, Cain seems like he could be a refreshing alternative.

But it was almost predictable that he’d have a “public hair on the coke can” moment. Not only because of the fact that the quickest way to politically lynch a conservative black man is to drag forth the old racist stereotype that the black man can’t control his libido, but also because the guy is a political neophyte who has never really been vetted in a serious way before. Unlike Perry and Romney, Cain has never held any elected office. He’s been involved in politics, but generally as a behind the scenes operator. He has never put a target on his back until he became the GOP frontrunner, and now everything that could ever possibly come out about him is going to come out.

Romney and Perry have the advantage of having attained a governorship, with Romney having done that in a state which is heavily Democratic. Generally speaking, to attain an office like this, you have to work your way up the political ladder. As you work your way up, you put a bigger and bigger target on your back. People have an incentive to dig. Any skeletons in your closet are going to come out, even if they are skeletons someone else put there. All the chickens from your past are going to come home to roost.

Mitt Romney comes from a political family, his father having been Governor of Michigan. This is an advantage to Romney because he would have been exposed to the rancorous nature of politics from an early age. Romney actually attained the governorship of Massachusetts as a relative newcomer to politics — his only experience prior to winning Governor was a failed challenge to Ted Kennedy’s seat in 1994. Nonetheless, this would have put a big enough target on his back for opponents to start digging. His successful gubernatorial run in a Democratic state certainly would have given opponents and the media an incentive to dig.

Rick Perry won his first election to the Texas House in 1984, ironically as a Democrat. After that, as a Republican, he ran for Agricultural Commissioner. From there he ran for Lieutenant Governor, and was elevated to Governor once George W. Bush assumed his role as President. Perry has only really ever faced a tough high-profile race once in his career, which was for Lieutenant Governor. I think his weaknesses as a candidate have been showing in his primary performance.

Cain has virtually no political experience. He has never held any elected office. All the accusations, whether true or not, are going to start coming out now. For the first time, he’s painted a big target on himself. Having run for political office before is certainly not a guarantee you won’t come under new allegations, after all it was Bill Clinton who had a team dedicated to dealing with “bimbo eruptions,” but having run for lower offices previously at least means some of the sources for allegations your opponents might know about have already been used up, and overcome. Herman Cain will have the disadvantage of having to deal with many of them now, rather than in prior races during his political career.

It’s a risk trying to win a national office with someone who has never even held a single elected office. Even Obama, despite his lack of real political experience, at least had the Chicago machine behind him. While I like many of Cain’s positions, have been disappointed in Perry, and harbor no real love for Mitt, I’m wary of pushing such a political neophyte as Cain onto center stage. It’s a huge gamble, and the stakes are unbelievably high for 2012. Our primary goal is to ensure Obama does not get a second term. For that I want the strongest candidate we can run. As much as I wish that could be Herman Cain, his lack of real experience on the political stage is a major issue I don’t think GOP primary voters should overlook.

14 thoughts on “Cain Accusations Show Why Beginners Have it Rough”