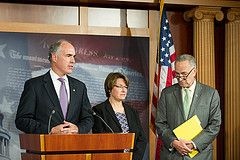 Sen. Bob Casey who ran a campaign to get the support of gun owners changed his tune quite a while ago. He’s on board with the sweeping semi-auto bans, private sale bans, and magazine bans.

Now he wants to make gun owners a felon if they are even suspected of potential crimes – beyond the standard “terror watch list” restriction which could end your right to possess firearms just for having the same name as some person who may not have even visited this country.

Convictions, evidence, and watch list status are no longer required under the plan he announced today. Let someone give your name as a suspect in some crime that happens to include a victim in a protected class, and you lose your Constitutional rights.