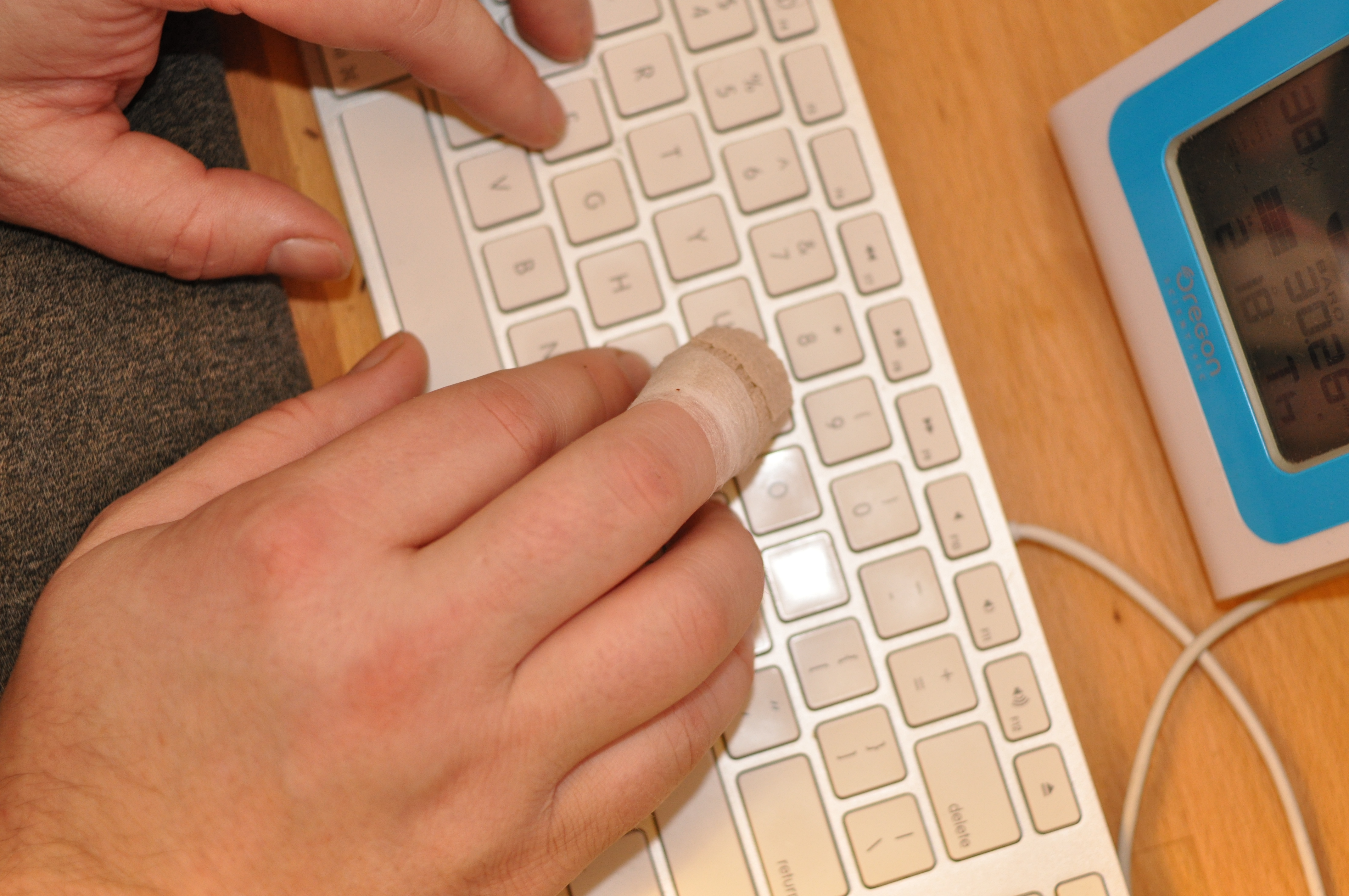 You’ll have to bear with me here. Last Friday I lobbed the tip of my finger off with a mandoline slicer. I couldn’t get it to stop bleeding. While I applied pressure to the wound,Â deciding whether cauterization on a hot stove burner would be more or less painful than dealing with emergency care, Bitter threatened to knock me out with a frying pan and drag me there unconscious if need be, so away I went. There’s too much CYA and waiting in emergency medicine today. Horrible experience. The stove would have been less painful.Â They tried to convince me to throw out my slicer, since they see a lot of injuries from mandolines, but to meÂ if I want to slice the tips of my fingers off, damnit, this is America. Patch me up and get me on my way! I am wearing a sock around my finger to cover the little super glue strip thing they put over it. Supposedly it’ll fall off when it’s time. But it does make typing problematic. Links are easier:

Charles C.W. Cooke: Heller was not an empty decision. It was a pretty strong opinion, if you read it as a whole, rather than cherry picking, as the lower courts do. Hopefully future courts will someday take it seriously.

Apparently Jeb Bush tweeting about getting a gun as a gift is pissing off all the right people.

Tam: “Well, which is it, Atlantic Magazine? Is the AR platform an underpowered jammomatic, like you had Major General Scales write? Or is it a nearly-automated, death-spraying killing machine, like you had Mark Obbie write?” (Quoted from the Book of Face)

Joe Huffman takes a look at how concealed carry has grown over the past decade or so. Herring was a fool to tinker with concealed carry in Virginia, given those numbers. Not all those permit holders are Republicans, you know.

Speaking of that, gun sales are surging in blue Delaware.

You really have to wonder when the other side is going to realize that absent PLCAA repeal, which Hillary will fight for, the whole lawsuit strategy is just a waste of time and money.

Randy Barnett, who I think would make a great compromise candidate for Obama, writes in USA Today about Scalia’s effort to restore the right to keep and bear arms.

Clayton Cramer has a new paper circulating on whether gun rationing laws have any effect.

Charles C.W. Cooke notes that the Dems’ borking of Robert Bork set the precedent. As an interesting side note: if it had been Bork confirmed instead of Anthony Kennedy, we never would have won Heller. Bork was opposed to the individual rights interpretation of the 2nd Amendment, though I believe he’s come around now.

Also from Charles C.W. Cooke: “Heller Is Reason Enough for the Republican Senate to Take Its Time Replacing Scalia.”

Daily Caller: Scalia Replacement Is the Line in the Sand For Gun Owners.

Kane says she won’t run for another term as Attorney General. She shouldn’t even finish out her current one.

Moron: Congressional Candidate Dan Muroff says it’s “not sporting” to use a semi-automatic weapons for self-defense. It’s not sporting to break into my house in the middle of the night. This ain’t a golf game, Dan.

The US is the only industrialized country to lead in selfie deaths. Clearly we must regulate cell phones more strictly, and it’s just common sense to ban selfie sticks.

The Washington Post thinks the anti-gun groups should stop bellyaching over McAuliffe.

Constitutional Carry gets pulled from the schedule in West Virginia.

Ted Nugent would have saved himself a lot of grief if he had just said this from the beginning. Or you know, just been more careful.

Expect to see more stories like this which play down the massive increase in the number of permit holders.

Joel Kotkin: The Religious Right is Being Left Behind. Whether one thinks it’s bad or good, it is hard to deny it’s demographics.

I’ve always thought that John Boehner was a dim bulb. This just confirms it.

Millennials like socialism, but they have no idea what socialism is. When socialists ideas are tested on their own, millennials don’t like them.