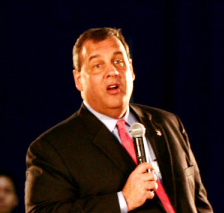 Charles C.W. Cooke reports on Governor Christie’s latest pardon of yet another person who found himself caught up in the web of the Garden State’s byzantine gun regulations. Christie still has not announced whether he’s going to run in 2016. Despite the fact that he’s been better on guns than most every other New Jersey governor, he’s not going to overcome the fact that he’s a governor in a state where people die waiting for gun permits.Â That’s not a small issue. For Carol Brown, whatever Second Amendment rights anyone will claim she had did not effectively exist for her. She would have been no worse off living under a regime where guns were simply banned entirely, because she died waiting for fingerprints to get back from the FBI.

Personally, my biggest beef with Chris Christie is that he’s got a “law and order” streak a mile wide, and I’ve grown tired of that branch of the “conservative movement.” He also does not hide his contempt for libertarians, so I don’t see he’s really working to earn my vote. But I will give him credit where it is due, pardoningÂ Steffon Josey-Davis was the right and decent thing to do.

19 thoughts on “Another Pardon for Chris Christie”