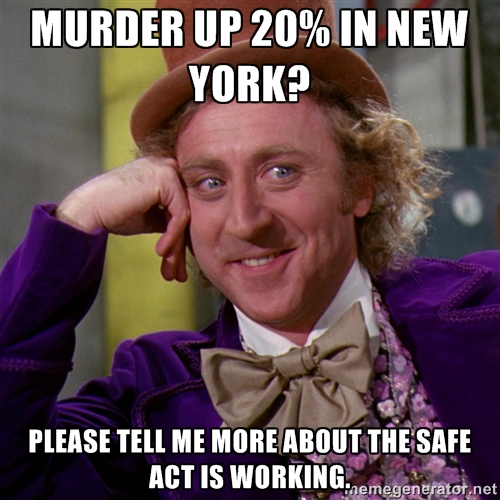 Murder in New York City is up 20%. Now, it’s quite possible to argue this is a side-effect of electing a socialist mayor who picks fights with the NYPD, but it’s quite certain in this case that gun control isn’t helping, a fact that New York State Rifle and Pistol Association has been pointing out.

Unfortunately, I don’t think any of the supports of the bill care that it’s ineffective. They knew that when they passed it. All the politicians care about is that after Sandy Hook and Webster, something had to be done, and SAFE was something, so therefore it had to be done. This is the most powerful force in politics, and when it’s set in motion, bad results are nearly always guaranteed. Now crime is up 20% in New York, and the usual suspects will be clamoring for something to be done. God help us on what that something is going to be.

10 thoughts on “How’s that SAFE Act Working Out for Ya?”