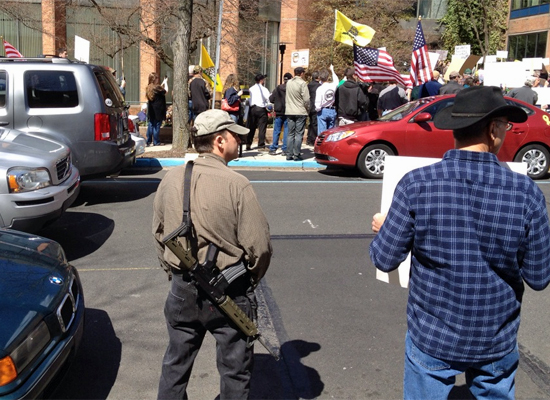 Now that we’ve endured three losses at the hands of the rifle OC crowd, it does beg the question of what to do to mitigate the damage. Perhaps the best thing to do would be to get Texas to pass an open carry bill as soon as humanly possible, but I suspect that’s going to be a bigger uphill climb the longer this goes on. I also suspect it wouldn’t stop. If you take a look atÂ Open Carry Texas’ mission statement, you’ll notice affecting legislation is number three. Their primary goal is to “educate” Texans. So I think we’re stuck with this. I also don’t think we’re going to convince them to stop, so we can expect more losses. One thing I’d mention is that Watts seems to be pushing each company a little further. I believe this is meant to desensitize us to the losses, until she can eventually convince one company to actually ban guns on their premises, and then eventually to post. I’m fairly certain this is where it will lead. One one company crosses that Rubicon, others will follow. It’s a grim future.

Taking a look at Open Carry Texas’ busy schedule, we have the following Restaurants up who I’m nearly certain will be targeted by Shannon Watts:

I don’t believe Shannon Watts will jump on these until we’re closer to the planned event. She’ll want the pictures and the news footage to promote the campaign. Sonic is an Oklahoma-based business. They stand a good chance of standing up to Shannon Watts. But who knows? Open Carry Texas must be taking some heat, or they wouldn’t be trying to deny any responsibility. I’ll repeat, a tactic that accomplishes nearly nothing, yet motivates our opponents to action and causes us to lose ground in the culture is a bad tactic. The biggest asset we have, and the biggest problem they have, is that there’s a very wide enthusiasm gap on the gun issue. People who want gun control just don’t want it as bad as we want freedom. But OCT is helping close that gap. If you look at Moms Demand’s Facebook group, their posts on open carry draw a much higher level of engagement (measures by shares, likes and comments) than other non-OC topics. Whether you mean to or not, if you carry a rifle into a fast food joint, you’re not accomplishing anything except helping Shannon Watts succeed.

50 thoughts on “Next Battles in the Restaurant Wars”