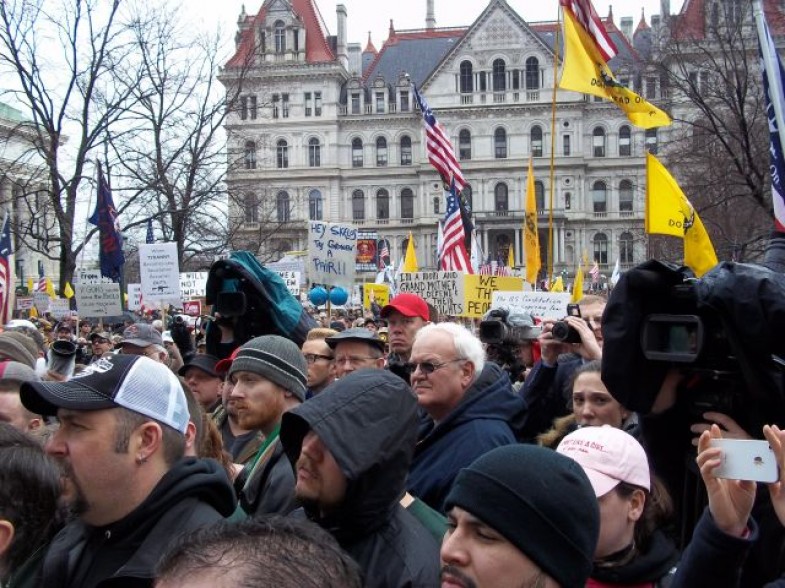 That’s the question Jeff SoyerÂ asks, in regards to NYSRPA bailing out of the repeated protests at the State Capitol. I’ve been thinking about how to approach this topic, because I don’t really have any fundamental beef where NYSRPA thinks their focus ought to be, and I tend to agree with the notion that protests are among the less effective methods of activism out there unless it’s used very judiciously. It certainly has its place, but endless protesting and rallying just squanders grassroots energy and conditions both lawmakers and the public to ignore it. At some point, we have to be heard at the polls.

Let me quote from Tom’s comments:

There have been many studies and surveys done regarding the population demographics of the people of this country and state our research tells us New York State is divided in this manner (Numbers rounded): Rabidly Anti-Gun 22% Somewhere in between 46% Avidly Pro Gun 32%

Fellow gun owners I submit this to you for your consideration. We will never convert the 22% rabid anti-gunners, we donâ€™t have to convert the 32% avid pro gunners but we must convert a sizable portion of the 46% of those somewhere in between if we want to retain our 2nd Amendment Rights long term. These are the soccer moms, the guys who say Iâ€™ve never shot a gun but would like to try it and the people worried about their safety. How do we do that? Not by standing on stage screaming obscenities at Cuomo and certainly at large rallies where people stand on stage, pound their chest and tell the attendees to prepare for war. That frightens the very people we want to attract to our side, the people who will insure 2nd Amendment Rights for our grandchildren.

I’ve said before that what we need to buy acquiescence from that 46% more than anything, but that’s conditioned on there being a generally favorable environment for our issue. There can present circumstances where acquiescence is not enough. Where the political elites and politicians are actively hostile, you can buy all the acquiescence in the world and it won’t amount to a hill of beans. If the great middle are not willing vote gun rights, it doesn’t matter if you convince them that the SAFE act was unconstitutional, unfair, and useless. If they then go ahead and vote for Cuomo again, you haven’t gained anything. You have to not only win that 46% over, but win them over enough to convince them to vote against the people who did this to you.

Or, you can depend on the Courts to save you. While I wish the Federal Court case against the SAFE Act all the luck in the world, the Second Circuit Court of Appeals has demonstrated nothing but unusual hostility towards the right to keep and bear arms. Beyond the Second Circuit, I’m not convinced the Supreme Court is in a position to help us out any further on gun rights. I’ve love to be wrong, but I’m not optimistic.

I believe bringing the rogue states back to America will necessarily involve federal preemption, but I can’t promise that will work. Even if it does work, it involves a years long wait for the Obama Administration to end, and then some time to push a hopefully Republican President and Congress to act. You could easily be looking at “Second Amendment Restoration Act of 2018” or maybe even 2022, to be more realistic. And that’s making a lot of optimistic assumptions.

In the mean time, I can understand why Tom might believe his organization is better off playing good cop to other groups’ bad cop, and he’s probably right about that, given areas they have chosen to lobby and litigate. But until the calvary actually appears from over the hill, New York gun owners are surrounded. Their backs are against the wall, and many of them have been rendered felons for refusing to take part in Cuomo’s utopian daydreams. While in ordinary times, I’d quickly agree that overheated rhetoric helps nothing, but what of difficult times? During difficult times I think it’s necessary, as Thomas Jefferson said, to remind officials that the people still possess “the spirit of resistance to government.” We are a people who threw off our previous form of government because its previous officials conspired to disarm us. Today’s officials would do well to remember that, so I’m not going to suggest anyone is in the wrong for reminding them.

20 thoughts on “Are Protests Getting out of Hand?”