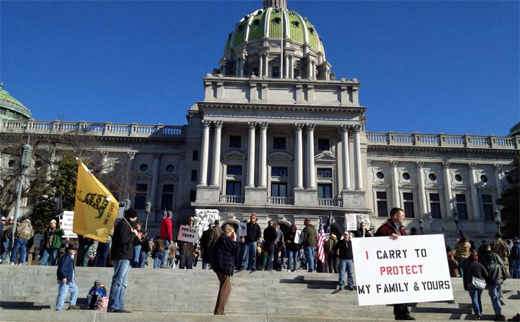 It looks like one mid-state Pennsylvania Republican is putting in a request for some state economic investment dollars to go for luring gun companies to the Commonwealth from anti-gun states. Back in February, several lawmakers at the state level started writing letters to gun companies in unfriendly states asking them to consider Pennsylvania.

I’m not really going to comment on the use of millions of taxpayer dollars to bring gun companies in since I don’t know much about the program. In the article, the third paragraph describes the $38 million as matching grants that sound like handouts, but then eight paragraphs later, the program is described as a loan program.

Kahr has already signed a contract with Pike County, PA authorities as of mid-June to start the process of getting permits and engineers out to a 620-acre business park that they can snatch up for $2 million. They’ve apparently already hired many of the firms needed to seal the deal, and they started a search for someone to oversee the process. (Oddly, even though the company was already starting the process of securing the Pennsylvania property, they apparently had a contest on Facebook asking fans what state they should move to.)

5 thoughts on “$38 Million for Gun Companies”