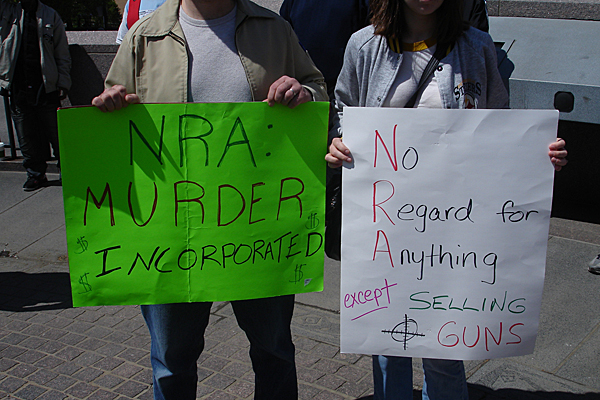 We already know that Mike Bloomberg is spending millions to put his advertisements on tv in Pennsylvania with an actor telling gun owners that they have nothing to worry about in the bill that could make many of them felons.

Bloomberg’s coalition of anti-gun mayors are also hoping on board to promote a grassroots feel with anti-gun rallies in Eastern Pennsylvania.

MAIG isÂ sponsoring a rally for gun control on SaturdayÂ just north of Philadelphia, alongside a local state representative’s new anti-gun advocacy group,Â Bucks Safe, that will coincide with the multi-million dollar television ad purchase. Locally, Concerned Gun Owners of Bucks County are letting gun owners know that they can go oppose it, but advise folks to take a very non-aggressive tone in any signs and to make it a fairly silent protest. (I think it’s great advice. It’s also another example of fantastic use of local organizing to stay on top of events that larger groups can’t really cover in the same way.) Farther north, MAIG’s representative in Easton, PA is partnering with Organizing for Action for an anti-gun rally tomorrow afternoon. Another MAIG mayor, this one from Chester in Delaware County, is advertising a press event for more gun control.

Speaking of OFA, they must have heard that Pennsylvania gun owners have been organizing massive postcard and letter campaigns to lawmakers as of late because now they are trying to do petitions for gun control in Democratic strongholds in and around Philadelphia like Media, Center City, New Hope, Ambler, and North Philadelphia.

On the rally front, OFA has recruited Montgomery County Commissioner Josh Shapiro to lead their gun control drive locally tomorrow. (Everyone in political circles says that Shapiro has eyes on statewide office – Governor or a Senate seat – so make sure to keep this in mind next time local gun owners see his name on a ballot.) In the Lehigh Valley area, OFA is doing a vigil tomorrow night to promote more gun control. (It’s probably wrong to admit this, but I would get a good chuckle out of anyone who brought one of the many fire extinguisher-themed pro-rights messages to stand across from a candlelight vigil.)