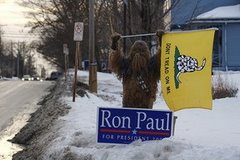 You have to know Cody Wilson, of the WikiWeapon Project, is doing something right if Josh Horwitz is writing an entire article which is nothing less than an anaphylactic reaction to the thick and luxuriant fur on Cody’s wookie suit. The more I look at the WikiWeapon, the more I think this looks like Reagan’s “Star Wars” program strategically. The “Star Wars” program was about as much of a technological pipe dream as a pistol you could make on a 3D printer, but it scared the Soviets enough that they were forced to spend a lot of time and energy thinking of ways to counter it; money they could ill afford to spend. The fact that our opponents are having a cow over it is good enough reason to push the technology and continue to democratize it. Gun control has always been ineffective, but now it is to be obsolete as well, as we’ve demonstrated on our blog.