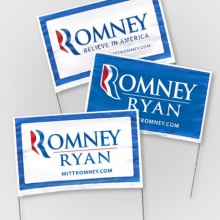 With Silly Season now in full swing, it is once again time for “Sign Wars.” This is one of those thing in politics that seems silly, because who ever has been convinced by a sign? As hard as it is for people who are even slightly civilly engaged to understand, it offers a lot of credit to the kinds of voters who will be deciding a close election such as this one. It is a soft form of psychological warfare, “All of my neighbors like this Romney guy, but I think Obama is a good husband, and a good man. I mean sure, he’s not been the best President, but maybe if my neighbors all like Romney then I should take another look at Romney.” If you can accomplish it, greatly outnumbering the opposition in the sign wars can demoralize partisans and suppress turnout. At least that’s the idea.

So now that October is upon us, the sign wars are starting. Bucks County seems to be blooming in yard signs much later this year than previous years. I’ve seen precious little. Chester County is starting to bloom. A brief drive through neighborhoods on the way to work, so far Romney-Ryan is outnumbering Obama by 10-to-1. These are comfortably wealthy to upper-middle-class neighborhoods in a county that is traditionally Republican, and went red in 2000 and 2004, but went blue in 2008 for Obama. I’d be curious to drive through the super wealthy parts of the ring counties and see how the sign wars are going there.

I tend to believe most people who are comfortably well off will still lean pretty heavily Republican. It’s not until you get into the super wealthy, where they feel the need to assuage their guilt by supporting socialism for the little people, do you get things trending more Democrat.