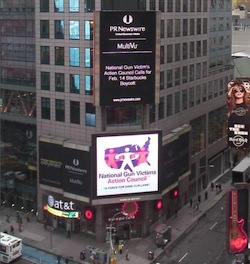 Jacob is wondering who’s paying for the ad on the Times Square jumbo-tron. My guess is that, as a 501(c)(3), they got some PSA time, meaning that PRNewswire ran it for them gratis. Not that it matters, as their boycott is still going to be made of epic fail. Last night, the Starbucks Appreciation Event topped 10,000 people on Facebook, and is now well on its way to 11,000. If everyone who went to that event spent $10 on average, that’s $100,000 more in sales Starbucks will have that day that they wouldn’t have had previously. While Starbucks grosses about 26 million in a day, this isn’t chump change for a day’s work.

If you’re not sure how you can spend ten bucks at Starbucks, Barron Barnett came up with a great ideaÂ of buying a few bags of Starbucks for the troops overseas. Follow the link for details if you’re stationed overseas or know someone who is stationed overseas that might like a little taste of home.

9 thoughts on “NGVAC Ad in Times Square on Starbucks Protest”