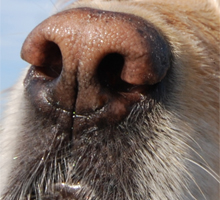 A commenter brought up an interesting point in regards to the search of Cemetery’s vehicle, from a lawyer who says the 4th Amendment is alive and well, and it’s still possible to win 4th Amendment cases:

Your real concern is that all other things being equal, police are going to be believed in court over citizens. Well, yea, and thatâ€™s always been true, and likely always will be. The advice to have your own camera rolling is well taken.

It is conceivable that sometime soon, technology will allow us to replace the dog’s nose. In this instance, police will be able to circle your vehicle with a device that takes in air samples, and looks for signatures of contraband. The interesting thing about this technology is, I think it actually would enhance civil liberties. I can’t cross examine a dog to find out what was going through its mind when it “alerted.” I can demand the logs from the device, demand to see its service records, and examine the science behind its function.

Even if it ends up a matter of judicial notice that the devices are reliable, and a reading can amount to probable cause, the officer at least would have to induce a reading somehow if he wanted to act merely on his suspicion, rather than just read the tea leaves of a dog’s behavior.

What’s interesting about such a sniffing device is how it would be affected under Kyllo v. United States. Unless such a device was generally available, it’s hard for me to see how it would be distinguished from the Kyllo case, except that involved a residence, and this would only presumably involve a vehicle or personal effects such as luggage. Perhaps the court would rule you have a lesser expectation of privacy. But as it is, a dog sniff doesn’t even constitute a search for 4th Amendment purposes, but if I were to use a device the mimics a dog’s nose, it presumably would. This goes to show the court’s logic in this matter is not entirely consistent.

7 thoughts on “More on Searches”