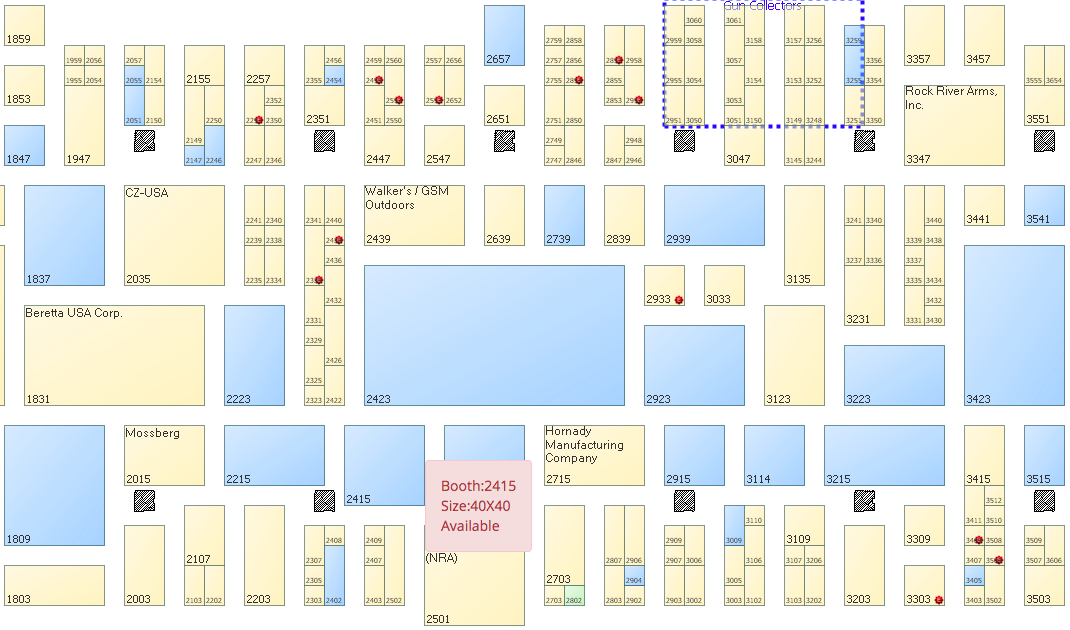 The surge in COVID cases and concerns on getting sick while traveling are causing exhibitors to pull out.

The Daily Beast reported earlier that several big industry names were already planning to skip the NRA Annual Meeting, despite NRA still advertising at the time that they would be present.

I mentioned to several folks at the time that if report was accurate (which I had some information that indicated it likely was to at least some degree – I didn’t have company names), that would equal .9 acres of suddenly empty spaces in the exhibit hall based on the map NRA was promoting.

Since The Daily Beast report, the NRA has now removed the attendee-focused maps and exhibitor lists. And, based on the map available through other access, you can see how many massive booths are now slated to be completely empty. The featured image on this post is a screenshot from the middle section of the interactive map. All blue booths are now available for use.

The new total of planned empty space is just a smidge under 1.4 acres because some makers have pulled out who weren’t in the initial report, in addition to many small vendors based on the suddenly empty spaces.

I had a long post that I trashed on NRA’s avoidance of talking about COVID. I opted not to publish because people are just getting stupid angry about it right now and I didn’t see it getting any better with the official approval of a vaccine today. However, as someone who has planned way too many events during this time, the worst possible thing you can do and the biggest drama is caused by not talking about it. Even if you make clear that you expect people will make the best decisions for themselves and their family, ignoring it does not make the situation go away. I have found that even more cautious and anxious people feel better just knowing what the expectations are so they can make the decisions that fit with their widely varying risk tolerance.

I hope that people going are going more for the politics of NRA internal issues than industry previews since NRA is trying to hard to hide how many members of the industry are pulling out. People hoping to see everything that NRA has traditionally advertised will be deeply disappointed and may not realize that it may no longer be worth their time.

UPDATE: NRA staff found the one version of the exhibitor map that was left open to the public (though it took quite a bit of clicking to find it) and have now removed it so that attendees can no longer see how many major exhibitors are pulling out of the event.