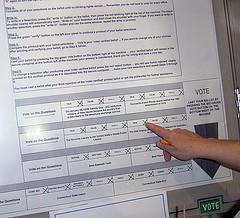 Someone who knows I’m a registered Republican even though I’m more libertarian than they really like and not enough party cheerleader. But a local woman posted something about Bucks County GOP losses this morning that made me think there was room for some serious observations about things both large and small local and county candidates could have done to improve their odds in an opposition party wave year – a factor that was completely predictable.

Of course, I should have known better than to assume anyone was interested in talking about things they saw that worked well for candidates and missed opportunities for others. People would rather scream “SHAME!” than actually think about things they could help do for their candidates of choice in next year’s elections.

I guess I’m sharing an edited version here since I hope that someone might be willing to be inspired by some of these thoughts and ultimately make a positive impact for gun rights.

Locally, I don’t think most of the GOP candidates prepared to run in what is, historically, going to be a year that favors the opposite party. There were some small things I noticed that probably made a difference, and then some big concepts, too.

For most of the county-level offices, other than glossy mailers that immediately go into the recycling bin, all I ever saw were the generic blue signs that had lots of last names with no visible office listed. The offices were listed on the signs, but nearly impossible to read in much smaller print squeezed between 3-5 last names of various GOP candidates on plain blue backgrounds. Even the glossy mailers I got a look at as they fell into the trash all had many candidates for different offices so that they all blended together.

In a specific an example, for sheriff, I knew a guy named Milt Warrell was on the ticket because his signs were big, bold, clear, and not typical campaign colors. They were bright yellow and black. If it weren’t for the fact that I knew the GOP incumbent had a different name, then I would not have know Milt was a Democrat or anything else. But, unlike the GOP candidate, I knew he was running for sheriff. Milt’s visible campaigning just showed him being something different and that he was clearly running for that office.

I get that local campaigns don’t have major resources to spend, and that’s why they try to campaign together. However, it’s not acceptable to have literally no individual efforts. First of all, and this is pretty important in a purple-blue state for Republicans, you need to accommodate the ticket splitters. There have been times when I’ll take a sign for one candidate, but leave the others behind because I’m not on board with them. So why should the guy or gal I like miss out?

On the state level, Sallie Munday, a candidate for our state Supreme Court, clearly benefitted from split ticket voting given the spread she put up statewide. As much as I hate to admit it, I do think part of it was because she is a woman. (There were several races where GOP women beat Dem men by percentages that aren’t likely explained by much more than they won the women’s vote because they are women.) But I think the significant vote spread was also because she was willing to run very targeted social media ads that don’t cost a ridiculous amount of money. Even before I had my NRA orange mailer on her endorsed candidacy, I was getting ads for her on the issues I clearly follow on Facebook. I knew her name well before Election Day, before the NRA ever sent anything about her, and on issues I care about.

On a side note, what was up with NRA PVF having multiple statewide-endorsed candidates in Pennsylvania and then leaving them off of their website? We had to go through the effort to scan in the mailer to share with Sebastian’s gun club. It would have been easier to point to a public webpage like we could with New Jersey.

Back to the Pennsylvania state races… Christine Fizzano Cannon was also doing some ads, though not as targeted as Munday’s, but enough that I knew she was a ballot for something. However, her good move was to do several “alert” style ads starting around 11:00am on Election Day over the fact that Philadelphia purposefully printed her name incorrectly on about half of their voting machines. I don’t know if she ran those sponsored posts statewide, but every time I opened Facebook yesterday, I saw one here in a ring county. That plays very well into the narrative most suburbanites and “T” people have that Philly is corrupt. That’s hours of sending a message out there that will motivate many who may have been uninspired to make sure and hit the voting booth on the way home. Not to mention, the specific reason her name was chopped in Philly could have caused some split voting tickets because it’s something unique to women who don’t give up their maiden names, but also use their husband’s names. Philly decided not to recognize her “2nd” last name on half of their machines. That’s not something most men would face, and women know it. She beat out a Democratic woman, and I suspect that if we could get the timing of those votes cast for her, there was an uptick after she got the word out about Philly screwing her over.

There is one exception to the social media spending that didn’t win in a race I was watching closely, and that’s a local supervisor candidate. He started spending on Facebook ads right before the election, but they weren’t targeted (beyond location) and they were reproductions of those glossy mailers that go straight into trash. They didn’t tell me anything about him. It’s like someone told him to spend something online, but he didn’t know about any of the power to really target it. And since guns have come up as a local issue, he could have done something. I’m sure that’s true for a variety of other local issues that he didn’t really hit on.

I don’t think that online ad spending is the ticket to success, but I do think that individual campaigns that at least tried to talk about issues voters care about won out here over generic 3-5 candidate signs that barely fit the office names on there. It was expected to be an opposition party wave year, and they didn’t run like it at all here in Bucks County.

I also won’t ignore that Trump was a factor, even though federal races weren’t on the ticket here. But that isn’t a surprise since this is typically the result when one party takes the White House the previous year. One way to both run against what many find off-putting about Trump without actually running against him and his policies is to make yourself really likable. I see a huge missed opportunity with one relatively small office in Pennsylvania that could really spawn a lot of fun online ad themes, and that’s Prothonotary. I still can’t say it. I still don’t fully understand what they do (even though I believe some of it is genealogically-related), and I can assure you that other regular and irregular voters are in the same boat. Surely someone in a candidate’s circle of friends or family could help draft a series of funny videos around that theme. Run them online for not much money, and that could have been one more county office to hold onto just by running on a platform of being a likable person with a sense of humor.

There’s also the mobilization issue. How many GOP-leaning voters were put off by a lack of enthusiasm, a dislike of driving in dark and rain, and heavy rain? In an aging state like Pennsylvania, probably quite a few. Was there an effort to reach out to older voters who otherwise would have gone to vote? I don’t know. I know that some races were close enough that everything should be on the table as proposals to GOTV for the county GOP. I also know enough to know that they won’t do it here. Sad.

4 thoughts on “After Action Report in a Philly Ring County”