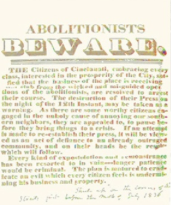 Clayton Cramer is trying to raise money via Kickstarter to do a filmÂ on The Oberlin-Wellington Rescue. With 13 days left to go there’s only $51 dollars, and I’m $50 of that. The Oberlin-Wellington rescue is an example of Americans using their right to keep and bear arms to resist a government intent on keeping people enslaved and treated as property:

As soon as residents heard of the marshal’s actions, a group of men rushed to Wellington. They joined like-minded residents of Wellington and attempted to free Price, but the marshal and his deputies took refuge in a local hotel.

After peaceful negotiations failed, the rescuers stormed the hotel and found Price in the attic. The group immediately returned Price to Oberlin, where they hid him in the home ofÂ James Harris Fairchild, a future president ofÂ Oberlin College. A short time later, they took Price toÂ Canada. Under British rule, Canada had no slavery and Price did not have to worry about US authorities there.

I think it’s important these stories are told, especially when it comes to convincing people who don’t fit into the OFWG demographic that RKBA is important. This was not a right made up by the Supreme Court. Armed resistance to tyranny is woven throughout our history.