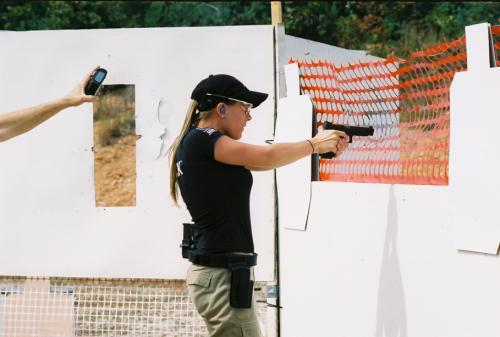 SayUncle says he doesn’t get ranges that ban carry. I think it’s one of the sillier things you’ll find out there in the gun community, but their is an explanation for why it’s more common than it should be. The most frequent retort is that insurance is the reason, but I don’t actually believe that’s the case most of the time. As someone who is currently an officer at a local club, I can probably speak to what’s driving some clubs to adopt this.

Part of it goes back toÂ Michael Bane’sÂ assertion of there being a Gun Culture 1.0, and a Gun Culture 2.0. I’m reluctant to use this analogy, because there’s not really as clean a division among the gun culture as it implies, but it is useful for illustrating the mentality difference from those in the culture who are self-defense oriented, and those that are more connected to the traditional hunting and shooting culture. There is significant overlap between the two cultures, but there are even generational differences in how one approaches the subject of concealed carry, for instance.

The vast majority of clubs are run by people from Gun Culture 1.0. This is certainly true of my club. Except my club does allow concealed carry, you just have to keep it concealed, and aren’t permitted to draw or shoot your carry piece except in an emergency. Pennsylvania has had concealed carry longer than most other states (since 1989), so even most people in Gun Culture 1.0 here carry, even if they aren’t shooting IPSC, IDPA or any of the other action or practical shooting disciplines. The reason clubs are run by Gun Culture 1.0 is because those are the people with the time to invest in overseeing a club. It takes a lot of work, and it’s not something most people in their 30s and 40s have time for. I barely have time for it, and I just basically try to do my job and not much else.

The other major factor that plays into rules like this is that most club boards are responsible for dealing with range incidents. If the club is large enough, the board is typically going to see a parade from the small minority of people who’s gun handling and safety mentality is either poor or non-existent. It’s relatively easy to fall into a mindset that your members are not to be trusted, since you’re dealing with grave stupidity on a regular basis. You’ll never see the 99% of people who are safe. You’ll spend a lot of time interacting with the 1% who aren’t.

I’ve always wondered whether it would be better to set high standards for getting into a private club, but once those standards are met, you are essentially bound only by a handful of safety oriented rules. Our club has a qualification, but it’s essentially being able to hit a rather large piece of paper at ten yards with a pistol. You have to be a real wild man with a gun to fail our qualifier. If you were going to allow someone to, say, draw from holster, it wouldn’t be unreasonable to make them qualify to do so, so someone can verify they know how to do the task safely. The unfortunate fact, at least based on my experience at clubs, is that if you allowed it broadly, it’s not going to be too long before someone puts a round in their leg, or even worse, someone else’s leg. There are a few local commercial ranges that allow draw from holster, but both have armor plating between stalls. Most clubs don’t have the money for that kind of setup, and most people don’t want to be next to a Cletus who can’t avoid finger f***ing his trigger guard every time he draws if the only thing separating you is a few feet of air.

My club probably implements a reasonable compromise between Gun Culture 1.0 and 2.0, when it comes to carrying on the premises. Not all do, and that’s unfortunate. But it’s also a product of the fundamental nature of clubs, and the membership. Clubs are civic organizations, and not really structured like businesses. People in the GC 1.0 age group are more familiar with and better at navigating that kind of organization than people in the GC 2.0 age group, who tend to want to think of shooting facilities as a product they buy or don’t buy, rather than a civic, membership driven enterprise. This is understandable, but without GC 2.0 stepping up, eventually we’re going to lose a lot of good places to shoot, and that will really be unfortunate.